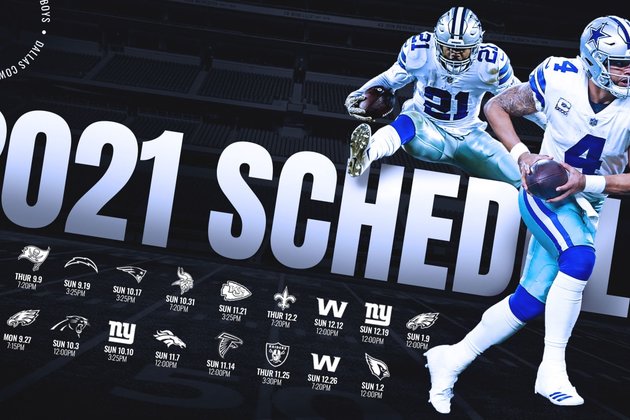 FRISCO, Texas - The season opener was revealed Wednesday morning, and now the rest is available.

The Cowboys' full 2021 schedule was announced Wednesday night, highlighted by six standalone national games. It starts right away with the Thursday night season opener in Tampa, followed closely by a Monday night game against Philadelphia.

The schedule currently features two appearances on Sunday night football - one road appearance against Minnesota on Halloween night, followed by a late-season division tilt against Washington on Dec. 26.

Finally, there will be back-to-back, nationally televised Thursday games centered around Thanksgiving - as has become customary. The Cowboys will welcome the Las Vegas Raiders to AT&T Stadium on Thanksgiving Day, marking the third time the Raiders have played the Thanksgiving game since the new stadium in 2009 - second only to Washington.

The following week, the Cowboys will travel to New Orleans for a primetime Thursday matchup against the Saints.

Here's a look at the full slate: