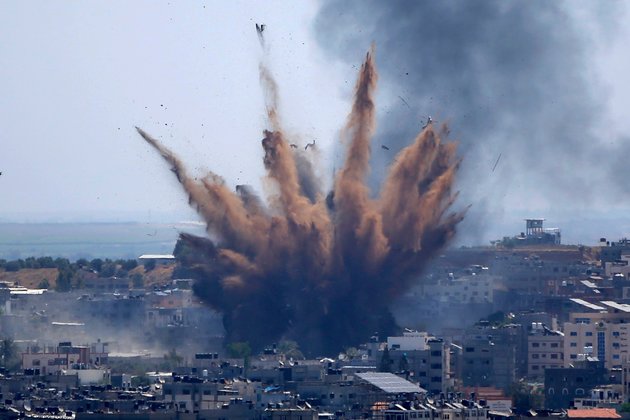 Israel's military commanders have drafted a battle plan for an incursion into Gaza and planned to submit it to military chiefs later Thursday, a spokesman for the Israeli Defense Forces has confirmed.

IDF spokesperson Hidai Zilberman told local media in a briefing that preparations for the possibility of a ground incursion are under way. The IDF has deployed additional ground troops - from the Paratroopers Brigade, Golani Infantry Brigade and 7th Armored Brigade - to the Gaza border, along with tanks and armored personnel carriers.

The decision on whether to invade the Gaza Strip, which is controlled by the Islamist Hamas group, is up to the Israeli government but if the go-ahead is given, it would mark the first incursion into the territory since Israel invaded in 2014.

The Israeli military and Palestinian Hamas fighters continued fierce exchanges of rocket fire overnight Wednesday while Israeli cities saw a fresh wave of riots, which led to 400 arrests, say Israeli authorities. Hamas militants launched a string of rocket attacks Thursday at Israel after one of the Palestinian group's most senior commanders in Gaza, Bassem Issa, was killed in an Israeli airstrike.

Palestinians check the damage amid the rubble of a destroyed building on the first day of the Eid al-Fitr holiday, following Israeli airstrikes on the northern Gaza Strip town of Beit Lahia, early on May 13, 2021.

The trading of rockets has brought the death toll in Gaza to 83 by early Thursday, according to the Hamas health ministry, including 17 children. Local charities say some of the dead in Gaza were killed by Hamas rockets that fell short of their Israeli targets. The Palestinian Ministry of Health on Thursday said 487 people had been wounded. Seven Israelis had been killed, including a six-year-old boy, said Israeli authorities.

The UN has warned the conflict, which started in mid-April with clashes on the streets of Jerusalem, a city both Israelis and Palestinians consider to be their capital, risks "escalating towards a full-scale war."

Led by U.S. President Joe Biden, several foreign leaders are continuing to scramble to try to persuade both sides to de-escalate the conflict. Biden spoke personally to Israeli leader Benjamin Netanyahu Wednesday night. He said that Israel "had a right to defend itself," but he added: "My expectation and hope is this will be closing down sooner than later."

An Israeli firefighter stands near a burning Israeli police car during clashes between Israeli police and members of the country's Arab minority in the Arab-Jewish town of Lod, Israel, May 12, 2021.

James Cleverly, UK Minister for Middle East and North Africa, described the level of rocket fire being launched into Israel from Gaza as "unprecedented," and called on all sides to "step back from the brink." He told a London radio station that Israel has a "legitimate right to defend itself" but must do so "proportionately," and he urged Hamas to cease its attacks. "There is no legitimate reason for these rockets to be fired, and we have demanded that they cease doing that," he added.

The Russian foreign ministry reported Hamas officials have approached the Kremlin saying they are ready to offer a cease-fire. Egypt has offered to send negotiators to try to end the fighting.

So far international efforts to avert a deepening military engagement have failed. Hamas renewed rocket fire into Israel at dawn Thursday after a lull of several hours Wednesday night. And the IDF continued to respond at what it said were key Hamas targets, destroying the militant group's treasuries and striking at more top Hamas leaders. The Israel's air force said it has been targeting locations tied to the "counterintelligence infrastructure" of Hamas, including the home of Iyad Tayeb, a senior Hamas commander.

Flames and smoke rise during Israeli air strikes amid a flare-up of Israel-Palestinian violence, in the southern Gaza Strip, May 11, 2021.

In total, Hamas has fired nearly 1,500 rockets toward Israel since Monday, with roughly a fifth landing inside Gaza, an IDF spokesperson said. Hundreds of Hamas rockets have been intercepted by Israel's Iron Dome missile defense system, according to the IDF, which says the system has had a 90% interception rate of Hamas rockets heading towards highly populated areas.

Ben Gurion Airport near Tel Aviv was closed to incoming commercial flights Thursday with planes diverted instead to Ramon Airport north of Eilat.

Tor Wennesland, the U.N.'s special envoy to the Middle East peace process, called for an immediate ceasefire. "We're escalating towards a full-scale war," he said on Twitter. "Leaders on all sides have to take the responsibility of de-escalation."

But IDF spokesman Lt Col. Jonathan Conricus, said: "We will continue to operate to attack their military infrastructure and prepare additional activities until they get the message." He said that Israel has struck 300 military targets since the start of the week and at least 20 of those killed were senior members of Hamas and the Palestinian Islamic Jihad faction.