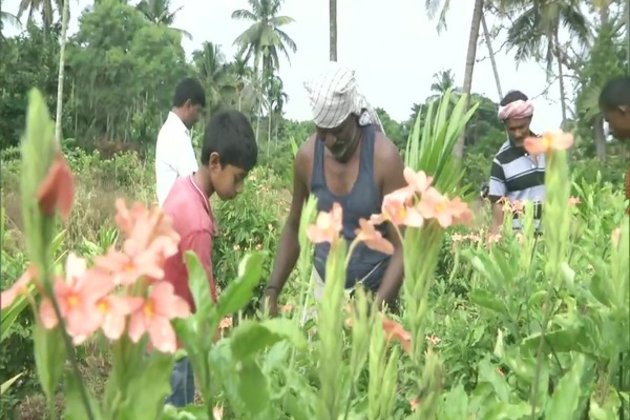 Shivamogga (Karnataka) [India], June 10 (ANI): The flower growers of Karnataka's Shivamogga urged the state government to provide financial support for unregistered farmers as their business have been impacted due to the Covid-19 pandemic.

Srinivas, a flower grower in Holehonnuru told ANI that the compensation given by the state government does not reach small-scale farmers because they are not registered. Even the officers refuse to identify their crops due to the same reason, he said.

"The government should order to evaluate everyone's crops," he added.

Elaborating on their hardships being faced by them, he said, "It is a huge loss to the farmers. The chemical fertilizers are also costlier now."Even though the government extended support after the first lockdown by announcing subsidized fertilizers, the flower growers were not able to procure them as they ran out of stock immediately. This forced them to buy expensive fertilizers for their crops, he said.

"After the first lockdown, we incurred losses, the government extended support by announcing subsidized fertilizers but they were always running out of stocks which forced us to buy them at private outlets," Srinivas said.

According to Srinivas, nearly a thousand families are involved in floriculture and their livelihood depends on it.

"We grow varieties of flowers here in Holehonnuru. We used to live happily during normal days without government's aid," he said. (ANI)