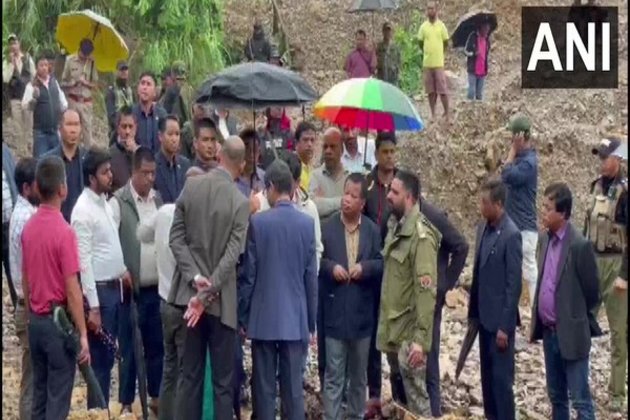 The road communication between Jaintia Hills in Meghalaya to three neighbouring states of Assam, Mizoram and Tripura has been disrupted for the past three days due to multiple landslides in the Lum Shnong area, the release from the Office of the Chief MinisterMedia and Communication Cell said.

An alternative route has been identified via Star Cement Premises in Lum Shnong, which has been open only for light motor vehicles.

During his visit to the affected area, Sangma interacted with truck drivers, who have been stranded in the area and assured them that the administration will extend all possible support.

The Chief Minister said that efforts are being made to restore the road link in the next 48-72 hours, however, it is subject to weather conditions.

He said that due to continuous rainfall the restoration work is hampered but the administration is working to ensure that the road communication is restored.

"All efforts are being made to restore the entire damaged portion of the road to ensure accessibility. However, there is a huge challenge, as the rain is not stopping. As the rain recedes and the flow of the water is diverted, the affected area can be restored," the Chief Minister said.

At Lum Shnong, waters from the hills have been gushing through the road, which has damaged the NH- 6 and is affecting the restoration works.

The work is underway currently to divert the flow of the water, the release read.

The Chief Minister said that in the next 24 hours, efforts will to ensure that light motor vehicles are able to use this road and if the rain recedes in the next 48-72 hours movement of essential vehicles may start, which is subject to weather conditions.

Approximately 1000 plus loaded trucks are stranded along both sides of the road, from Assam and Meghalaya.

He also held review meetings at Deputy Commissioner's Office at Khliehriat with administration officials and took stock of the situation in the district.

As per the release, the Chief Minister will visit Mawsynram on Monday and on Tuesday is leaving for Garo Hills to take stock of the situation.

Interacting with media at Khliehriat, he said that the Meghalaya government has written to the Ministry of Home Affairs, Government of India and has sought financial assistance amounting to Rs 300 cr.

"The rains have been unprecedented, in some areas, it has broken records for the past 40 years. This is real heavy rain, which was not expected. Major roads in highways and important roads in rural areas, and bridges have been damaged in the rains. There has been a huge impact as far as damages are concerned and the financial implication will be very high," Sangma said.

"There has been a huge impact on the livelihood of the people including damages to livestock, and farming activities across the State," he added.

He said that the government will take some time to assess the extent of damages. He also informed that Union Home Minister Amit Shah has been apprised of the situation.