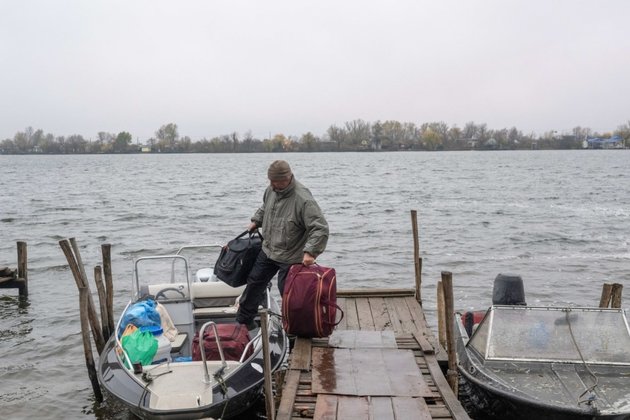 Kherson, Ukraine - Gunning the engine of his aging skiff, Oleksiy Kovbasyuk races away from Kherson toward an island in the Dnipro River, where stranded Ukrainians are desperate for help - or to escape.

Russian troops retreated from the southern city of Kherson last month to the other side of the Dnipro, but their snipers and artillery are still trained along the broad river, rendering it a new front line.

Forty-seven-year-old Kovbasyuk's concern is that vulnerable residents isolated on the islands in the river, a gray zone where Ukrainians either desperate for a ride out or for more supplies need his help.

'Some of these people haven't left their dacha since Kherson was liberated. They need some bread,' Kovbasyuk, wrapped in a hat and red scarf against the cold, told AFP journalists on his boat.

The crossing, with snow falling, is short but perilous.

'I got two bullet holes in my boat ... right after Russian soldiers fled to the other side,' the construction worker said.

Russian shelling missed his boat by just meters last week at the regularly targeted industrial waterfront south of Kherson city, where his boat was stored.

His destination one day this week was Potemkin Island, 8 kilometers long and 4 kilometers wide, just downstream from Kherson city.

The patch of land surrounded by icy currents has been caught up in intense shelling. Of the several hundred small summer homes on the island, only a handful are still inhabited.

Still Kovbasyuk is determined to bring food to those who want to stay and on evacuating others to the newly liberated west bank.

Icy winds buffet the boat and freezing water splashes over its side for 40 minutes until Kovbasyuk arrives and meets Oleksandr Sokolyk, a 64-year-old pensioner, also shuttling people to the mainland.

'Oleksiy, brother! I'm so happy to see you!' says the pensioner, hugging his friend on a pontoon next to a dacha.

A fisherman sails his boat on the Dnipro River as black smoke rises after an attack on an oil reserve in Kherson, on Nov. 20, 2022, amid the Russian invasion of Ukraine.

The island was once an oasis of calm just a short trip from Kherson.

But that was before the Russian invasion in February and Kherson's easy capture by Moscow's forces shortly after.

The fighting escalated in September as Ukrainian troops were clawing back territory. Now there is relentless crossfire over the river.

'The situation seems better now in Kherson. They have electricity. We haven't had any power here for a week,' Sokolyk said.

'And we spend every night under shelling. Left to right, right to left, just flying over us.'

Olga Shpinyova, in an elegant purple hat and winter coat is leaving the island to stay with her sister in Kherson.

'It will be better there than in my own flat in a building without water, heating or electricity,' she said, her dog, Tosha, and two small bags in hand.

She told AFP she had decided to leave the island after urgent pleas from her daughter and a close call when her home was shelled.

'I was lucky to be at my daughter's house at the time. It saved my life. My daughter called and said, 'You have to leave!'' Shpinyova told AFP.

Man carries bottles with the water from the Dnipro river in Kherson, on Nov. 14, 2022, amid Russia's invasion of Ukraine.

Authorities announced civilian evacuations by ferry between December 3 and 5 but they never materialized.

'We can't organize regular transport on the river. The occupiers wouldn't let us,' the regional governor Yaroslav Yanushevych told AFP.

'Unfortunately, we can't guarantee the security of the people' crossing, he said.

On the return journey to Kherson with three people boarded, a missile fell right in front of Sokolyk's boat.

'I have no idea where it came from,' he told AFP in shock.